An adventure of a lifetime

It may sound like a cliché, but I can guarantee you: taking part in an exchange programme to submerse yourself in a totally different culture from your own is really a life-changing opportunity you could not afford to miss. After these six months living in the Netherlands and studying at Erasmus University Rotterdam, I find myself a more mature person: I am more confident in solving problems; I am more skilled in communicating with people; and I am more acceptant and open-minded to new things that come to me in life.

Holland has long been a country that I wish to visit. It is small but strong; it is ethnically diverse yet solid. It is the pioneer in same-sex marriage and the tolerated use of soft drugs. It is even a country that closes down prisons due to a low crime rate. It is simply impossible to list out all the characteristics of the Netherlands that fascinate me in one single article. These were basically the things on my mind when I was choosing the Netherlands as my exchange destination. As for today, I am very happy to say that the Netherlands has not been a disappointment at all. Though challenges do arise from time to time, this country keeps on surprising me with its beautiful culture and wonderful people.

I came to Holland at the end of January when snow still occasionally fell. Though considered by the locals a ‘not-the-coldest winter’, as someone who has been spending most of his life in the Southeast Asia (Hong Kong), to be frank, it took me quite sometimes to adapt to the weather here in the Netherlands. The good thing is that heating systems seem to be essential in every building in the country, which saved me a couple of times from getting a cold. Also, as time goes by, the temperature would gradually grow to somewhere between 20-30 degrees Celsius. So for all the students coming from warm countries: you will be fine. Aside from the temperature, two things in particular that are so common in this country are the wind and the rain. The Netherlands is a very windy country and there is simply no way to escape from it. After all, windmills are what the country is renowned for. In addition, you should expect to see quite a lot of rainy days in this country. Luckily, for most of the time, they were only drizzling or showering rain, and therefore would not cause big problems even if you leave your umbrella at home.

Before coming to the Netherlands, I had been told that Dutch people are very straight forward, and therefore was a little bit worried about this. However, after encountering them in real life for a couple of times, I soon realised that there is a big difference between being straight forward and being rude. From my personal experience, most people in the country are nice and helpful. Being straight forward is just a way of communicating which makes discussions more efficient. Another characteristic of the people in the country is that they speak very good English. To be completely objective, after travelling to several European countries, including German and Switzerland, I can assure you that Dutch people, in general, speak the best English among these non-English European countries. Do not get me wrong: I am not discouraging you from learning Dutch. In fact, what is the point of studying abroad if you do not learn a word or two of the native language? Yet, it is also useful to know that you can always seek help from the locals using a language that you are more familiar with.

Concerning the prices in the Netherlands, to be honest, Holland is not the most affordable European country. However, when compared with those Nordic countries like Norway and Denmark, you will find that the prices here are actually quite reasonable. For those who would like to make good use of their money for later like I did (perhaps travelling around Europe), I suggest you cook your own meal. It may take some practices before you can cook a proper meal, but while you are saving money, you are also learning something new. What could be more appealing? Another big part of the daily life in the Netherlands has to do with the transportation. Here are my suggestions: get a bike; if you do not know who to ride – learn. Going to the campus or getting around the city is so much convenient with a bicycle. It just makes more sense to make good use of the well-equipped bike lanes that can be found everywhere in the country. If you fancy travelling around the country, you can always take advantage of the advanced railway system

The university I had been studying at during this exchange period is Erasmus University Rotterdam. Unlike my home university, a semester here (at least in EUR) is divided into two terms. In each term, students will have to choose the subjects they want to study before the term begins. Since the University needs to fit in examination period in each term, a semester here is significantly longer than that in my home university. Yet, I actually prefer this arrangement as it gives me a longer time to focus on fewer subjects at a time, which in turn enhanced my study in general. Another difference I have noticed is that many classes here require students to actively participate in discussions. This surprises me a lot because these discussions are encouraged even in lectures, but not only in tutorial classes (which is normally the case in Hong Kong).

The above paragraphs pretty much sum up my experience in the Netherlands during my exchange period. I hope everyone reading this will find them useful and entertaining. At the end of this article, I really want to express my gratitude and appreciation to ATP fonds, which provided me with the financial assistance that made my study in the country possible. Dank u wel!

Below is a photo taken on my first day at the University. 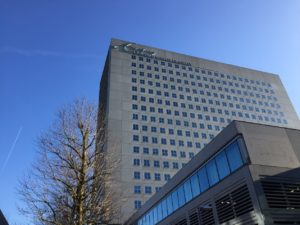