Before even deciding where I wanted to go on exchange, I set myself a goal: to become a local in a city other than Rotterdam because I have never lived anywhere else. After setting that goal, I needed to figure out where I wanted to become a local, and this is where my passion played a large role: food. I let my passion for food choose where I would wanted to spend four months of my life in and that turned out to be South-Korea. Because of my (basic) knowledge about their famous dishes such as Korean BBQ, Bibimbap, and their famous street food, I became very intrigued to learn more about the Korean cuisine! 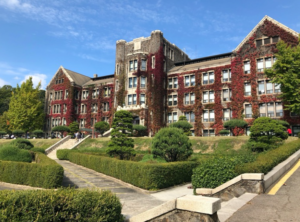 After months of dreaming about the foods in South-Korea, it became reality: I was selected to do my exchange at Yonsei University Seoul, one of the sky-universities! Sky-universities are the elite universities in South-Korea, and it was an honor for me to attend a university like Yonsei. When I first arrived on campus, there were so many students who were wearing the Yonsei merchandise and I felt so proud to be a part of their culture. Whenever people would ask my friends and I what we were doing in Seoul, they all got so shocked after we answered that we were studying at Yonsei University, because it is generally difficult to get in. Not only was I proud to be a Yonsei-student because of its status, but also because of the courses they provide and the beautiful campus they have. During my four months of exchange, I slowly saw the leaves on campus turn from green to red to yellow, and it was simply beautiful. 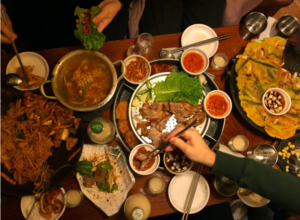 The city of Seoul itself was such an adventure, I learnt how it was divided in twenty-five districts (“Gu”), which meant that Seoul is ridiculously big! But luckily, I have met some amazing friends I could explore Seoul with. I met all of my friends at the dorms we stayed in. They were from the United States, Canada, Albania, and The Netherlands, and they are the most fun and outgoing people I have ever met! I am so lucky to have met these people because in the end, they were the people who made my exchange so incredibly fun. We had so many dinners together and we tried so many new Korean dishes. For example: in this photo, we ordered (from left to right): seafood pancake, pork feet (jokbal), and octopus noodles. It was very delicious and I am happy to have shared these memories with my friends who were also not afraid to try new dishes.

Because we did not have classes for at least four days, my friends and I decided to travel to the island Jeju, which is known as the Hawaii of South-Korea with its beautiful beaches and waterfalls! It was amazing to see such a different environment compared to Seoul, and it was absolutely refreshing seeing a different part of South-Korea. Within these four days, we truly bonded and it became one of  my favorite vacations I have been on so far. I got to know my friends so much more and at the end of the trip, they felt like family to me because we were basically spending every hour of the day together. I  believed that the Jeju trip has definitely made our friendship closer than ever! Looking back at my exchange, I have definitely reached my goal of becoming local in a different city other than Rotterdam Because I have “lived” in Seoul for four months, I can unquestionably say that I feel very much like a local. From the metro system to the tourist attractions, from the cutest coffee shop to the best place to shop, I think that I know a lot about the ins- and outs of Seoul! 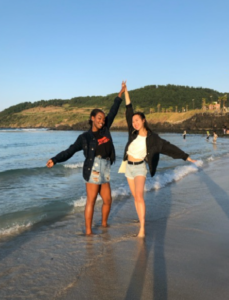 Not only have I gotten to become a local in this city, I have also fallen in love with it. The busy nightlife with amazing restaurants that are open 24/7, felt just so much more lively compared to Rotterdam, where the shops normally close at 18:00. Also, the people in Korea are the kindest people I have ever met! They are so helpful and welcome, and that is definitely what made me feel so welcome and at home there. In conclusion, I have experienced the best four months of my life in Seoul and I am forever grateful that I got to go on this lifechanging adventure! I have become more independent, met the kindest people, ate the most delicious things, challenged myself academically, gotten to learn more about the Korean culture, and gotten introduced to the other parts of South-Korea. But most of all, exchange made me fall in love with Seoul, something I have never thought would happen. 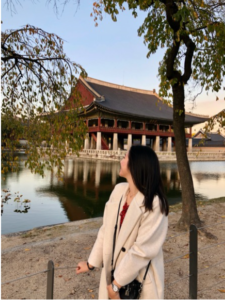 Lastly, I want to thank ATP for making my exchange possible by providing me with a grant which helped me live my exchange life in Seoul more effortlessly. Without this grant, I would not have done all the things in South-Korea that made my exchange so special, and I will be eternally thankful for this.